Brushing your teeth too hard?

Are you brushing your teeth too hard? 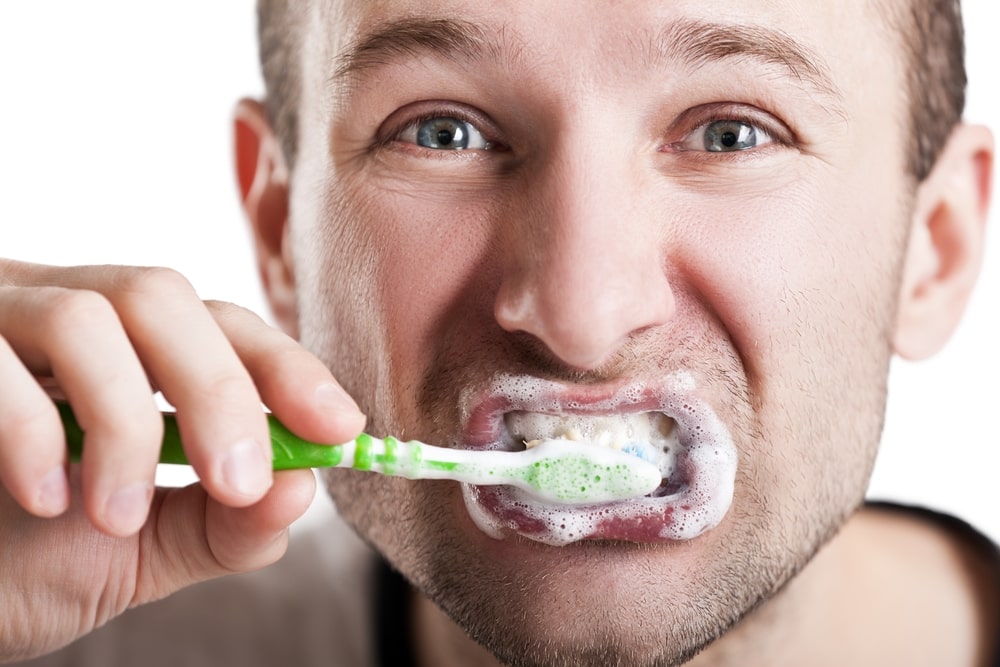 Brushing your teeth too hard? Doing so can come back to bite you. (Pun intended.)

I realize that in terms of “clean” very little comes close to the ol’ time honored tradition of using “a little elbow grease.” However, when dealing with the teeth and gums it is not, necessarily (as I’ve found out), a good thing.

Let’s take a look at that a second. I’m sure we’ve all heard of skin exfoliation doing wonders for creating younger more beautiful looking skin…or, at least I’ve seen a lot of commercials saying as much. Sometimes in the commercials someone is using a scrub brush to remove all those layers of old, dead skin. I’ve not only seen a scrub brush being used, but also scrapers and pumice stones as well. Although that might work for the skin, we can’t automatically apply the same principles we use for the skin, to the inside of your mouth.

Various studies (also here) have been done that show why brushing your teeth hard is not a good thing. When you brush your teeth too hard and for too long, what you are essentially doing, gradually but nevertheless, definitely, is removing layers of tooth enamel from the teeth themselves, and gum material from around the teeth. This is quite assuredly, not a good thing. First of all, the gums help protect one of the most vulnerable parts of your tooth; the root itself. The teeth roots do not have the same protective layer as the top part of your teeth, the crown, and are therefore more sensitive and vulnerable to decay. When you are brushing your teeth hard and for too long, it winds up causing recession along the gum line. Some of you might think you don’t brush too hard. One thing to consider is, though you may feel you’re brushing softly, the area of force is concentrated on a small surface. So, even though you feel you are brushing softly, it may not be at the appropriate amount of pressure.

As far as the teeth themselves are concerned, brushing your teeth too hard has a similar effect, to the effect it has on the gums. Namely, layers of the protective surface of the tooth can get worn down unnecessarily from doing so. The teeth will become more sensitive, you’ll have less protection from the acidity of food and bacteria, and obviously, less enamel.

Brushing your teeth, the right way.

So now that I’ve got you thinking with the affects of brushing your teeth too long and too hard, what IS the right way and just what is the recommended correct pressure?

Generally speaking, and this is commonly advised with every dentist that I’ve had the pleasure to meet, you shouldn’t be brushing your teeth for longer than 2 minutes at a time, or alternatively, less than that. It was found that after brushing your teeth for 2 minutes, you aren’t really cleaning your teeth any more. By then, most of the bacteria, food particles and plaque that could come off with brushing, already has. Brushing your teeth beyond that 2 minute mark is just not going to do much more. Obviously, make sure you floss as well, as the toothbrush is only going to be cleaning 3 of the surfaces of your teeth. You still have to clean in between the teeth.

The pressure that is recommended is on the order of the pressure of a smaller sized orange at about 5.3 ounces or, to get real specific, 150 grams. Obviously, unless you have some newfangled device that measures your brushing pressure, you won’t be able to accurately measure that you’re brushing at 150 grams. I can say this however, some electric brushes will stop if too much pressure is applied, so, you could use an electric brush if you find yourself brushing too hard. If you have any questions as to whether or not you are brushing too hard, you should come in to see the dentist. Either the dentist or hygienist can show you the ropes: instruct you on how often to brush, demonstrate proper technique for brushing your teeth and using floss, and what approximate force to apply to the teeth when you are brushing.

I hope this answered some questions or got you more information that you can use to better your oral health!