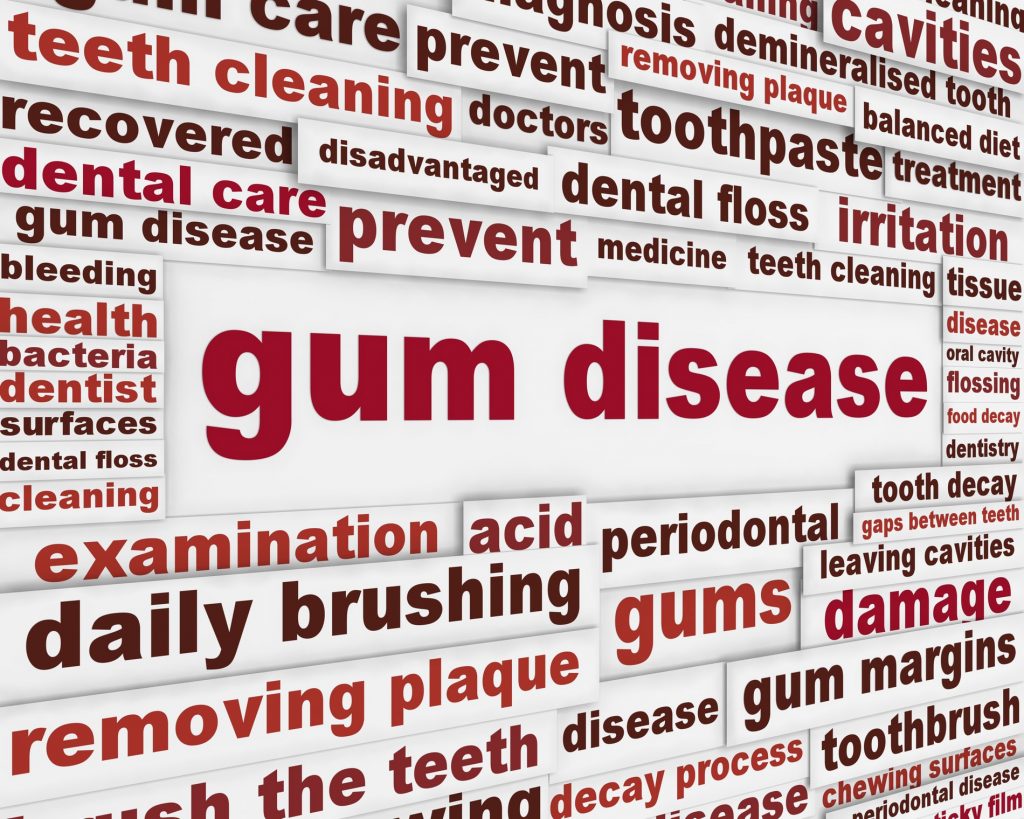 Very many people on this planet have heard the term “gum disease”. There are varying degrees of infamy, depending on the level of knowledge you have of it. There is almost a super villain quality about it. It’s like the Moriarty of oral health issues. Often seeming vague and mysterious, but always working to undermine the stability and foundations on which your chompers rest, making itself known through the evil crimes committed on your gums. Well, I’m going to try to make it elementary. (Sherlock references abound.)

What is gum disease?

Gum disease is an umbrella term which covers both gingivitis and periodontitis. Symptoms can range from bleeding gums and swollen gums to pus coming out of the space between your teeth and gums (which produces a pretty foul odor, and consequently some pretty bad breath). Gum disease comes from, essentially, bacteria. But there’s quite a bit more to it than that. When you eat food, drink soft drinks, sweet drinks etc., some of that food and drink stays in your mouth. It gets stuck between your teeth, in deep crevices in your molars, along the gum line, and if you have cavities or broken parts of your teeth, it can also get stuck in there. Your mouth is home to A LOT of different types of bacteria, and these bacteria love that food as much as (if not more) than you. They end up feeding on that food that was left in your mouth. They feed on it and they produce waste. The waste, food particles and the bacteria all create this substance called dental plaque. If dental plaque is left on the teeth for longer than even 24 hours it can start to harden and form something called dental tartar or calculus. The waste being produced is toxic to your gums and tissue. Your gums become inflamed because of a response in your body’s immune system. Your white blood cells are attacking the bacteria at this point which is causing the swelling, redness, and inflammation.

What comes next, you ask? Well, now that this infection is very close to the bone of your jaw, your body is a bit overzealous in it’s response. It starts pulling both gum and bone away from this infected area (the tooth, essentially) and bone resorption begins, or in other words, the bone surrounding your teeth begin to break down to get away from the infection. This ends up leaving pockets where bacteria and food can go even further down. When this occurs, and as the gum disease progresses, your teeth can become loose, and quite possibly, fall out. Below is an image representing the difference between a set of healthy teeth and gums, and those with gum disease:

Well, some would call it nagging. Others call it pestering. I call it good info and a needed reminder. What I’m referring to is, of course, all the times your dentist or hygienist has told you to brush and floss, possibly shown you, in great detail, exactly how to do it, has berated you for not doing it (or for not doing it properly), and has shown, expressly, their candid disagreement with you not cleaning your teeth properly.

From what I’ve witnessed, most of these guys and gals (dentists), have a good heart, and a good head on their shoulders. They speak sooth when they tell you these things. It apparently was never a ploy set up by the dental community, just to get you to buy more tooth brushes from them.

When my parents used to tell me that if I didn’t brush, my teeth would fall out, I bet even they didn’t think just how true it was. Well, here’s to you mom and dad, for wanting me to hold on to these pearly whites for as long as possible, and for telling me something which you probably thought was comparable to a parent telling their child that if they don’t go to sleep the monster under the bed will grab them, or something. Yeah…so, anyway, brush and floss your teeth, and keep them clean!